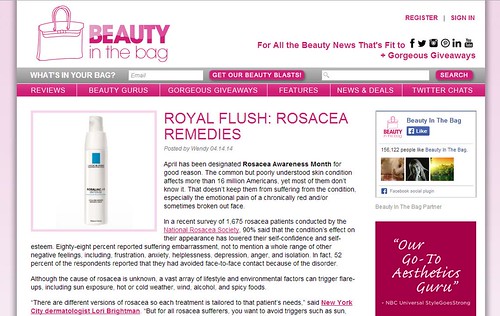 In a recent Beauty in the Bag article titled “Royal Flush: Rosacea Remedies,” Dr. Joel Schlessinger shares the latest advancements in the treatment of rosacea. Recent advancements in cosmeceuticals have made it easier than ever to minimize redness and soothe irritation.

Rosacea affects more than 16 million Americans and most of them don’t even know it. While there’s no known cause for this chronic redness, there are a number of factors that could contribute to its appearance. These factors include sun exposure, temperature changes, wind, alcohol, fragrances and spicy food. There are a number of over-the-counter treatments to minimize redness and inflammation. A dermatologist can also help you create a customized treatment plan to suit your needs.

Do you have a question for Dr. Joel Schlessinger? Share with us in the comments.

Dr. Joel Schlessinger is a dermatologist and cosmetic surgeon based in Omaha, NE.
View all posts by drjoelschlessinger »

Posted on May 8, 2014, in Dr. Joel Schlessinger in the Media. Bookmark the permalink. Leave a comment.