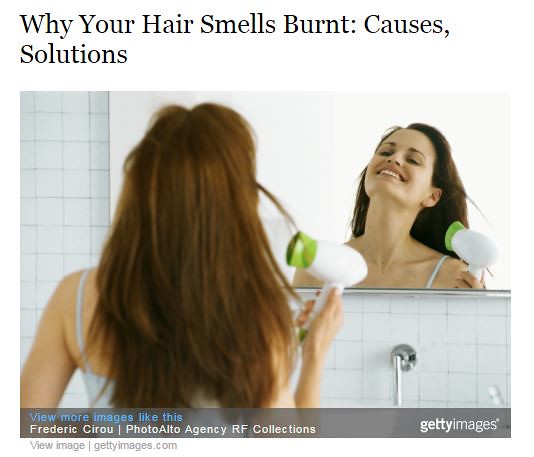 Smelling burnt hair after blow drying or using hot tools isn’t something you should ignore. Even using the right heat protectants and blow dryer attachments might not be enough. Dr. Joel Schlessinger recently talked to ScarySymptoms.com about what causes hair to smell burnt. Read on to learn what you can do to treat this issue.

Burnt hair is a condition that relates to a burning smell in hair, Dr. Joel Schlessinger says.

Smelling burnt hair, even when you’re not styling it, usually means enough damage has been done to actually burn the hair.

“This is generally due to over-processing of hair, combined with too much heat on the same hair,” Dr. Joel Schlessinger explains. “Once hair has been damaged by either heat or chemicals, it becomes thinner and open to further damage. Once this damage occurs, it is easier for a ‘burnt smell’ to set in and be retained.”

If you smell burnt hair, Dr. Joel Schlessinger says the first thing you need to do is give your hair a break.

“There are many things to avoid if hair has a burnt smell, but the most important of these to avoid is being too close to a curling iron or wand,” he says. “If and when hair needs to be dried, it is important to avoid too high of a heat on the drier and always hold the drier away from the hair.”

Keep in mind healthy hair that’s never been chemically treated burns at around 451 degrees Fahrenheit, but this temperature can be even lower depending on the hair’s health and how it responds to heat. To give you some perspective on how much damage hot tools can do, most flat irons can heat all the way up to 450 degrees Fahrenheit.

“Certain oils and nourishing shampoos will offer benefits to regain the natural smell of hair, but in the worst case scenario it will simply be months until the damaged hair has the chance to grow out (usually, hair grows about an inch per month),” he says. “During this growth time, it is essential to avoid trauma and heat/chemicals.”

To nourish and repair dry or damaged hair, try the René Furterer KARITÉ line. These formulas contain shea butter and oil, which are both rich in essential fatty acids and vitamins. The KARITÉ line helps lock in moisture, provide in-depth nutrition and restructure hair.

Do you have a question for Dr. Joel Schlessinger? Share with us in the comments. 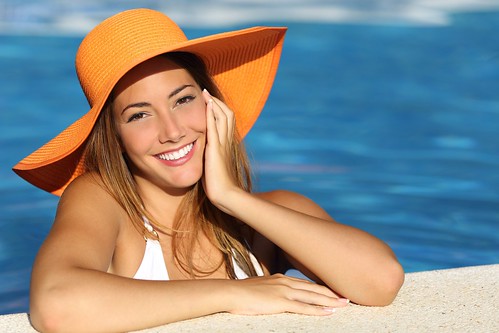 Applying sunscreen is an important defense against damaging UV rays, but many people resist this skin care step or simply forget to apply as they head out the door. The recent creation of the drinkable sunscreen UVO may be a way to encourage people to add sun protection to their daily regimen. Joel Schlessinger, MD responds to this new form of sun protection, which was detailed in an article titled “Drink your sunscreen? O.C. doctor says product protects from inside, some advise caution” published by The Orange County Gazette.

Protecting your body from the inside out is not a new idea. “This concept has been around for at least 12 years, starting with Heliocare, polypodium leucotomas,” Dr. Schlessinger explains. Sun-protection pills such as Heliocare gradually improve the body’s natural defense against UV rays. Heliocare contains a potent antioxidant extract that helps the skin maintain immune response against sun damage. These tablets are the only oral dietary supplements known to provide overall protection against photoaging. In addition to its sun protection benefits, Heliocare also protects skin’s elastin for a more youthful appearance.

UVO, the drinkable sunscreen created by Dr. Bobby Adwalla, follows similar principles. In an effort to make sun protection more convenient and palatable, Dr. Adwalla created a drinkable formula that combines 30 vitamins, phytonutrients and antioxidants to help skin absorb UV rays and decrease the damage of sunburns.  Clinical trials suggest a 12-ounce bottle of UVO provides three to five hours of protection. “I will be looking into UVO and expect to see more of these on the market over time,” says Dr. Schlessinger.

Ingestible sun protection is not a replacement for sunscreen, explains Dr. Joel Schlessinger.

Ingestible sun protection products such as EVO or Heliocare are intended to make sunscreen more appealing for daily use but should always be used in tandem with other protective measures. “While these aren’t a replacement for sunscreen,” says Dr. Joel Schlessinger, “they are a great addition to a regimen and can mean the difference between burning and not burning.”

If you do use an ingestible sun protection product, Dr. Schlessinger recommends that you also apply a broad-spectrum sunscreen with an SPF of 15 or higher. EltaMD UV Clear SPF 46 is a non-greasy, lightweight sunscreen that offers broad-spectrum protection against UV rays. This paraben-free, oil-free and fragrance-free formula wears wonderfully under makeup and prevents signs of photoaging such as wrinkles and dark spots. For your more active days, Dr. Schlessinger recommends EltaMD UV Sport Water-Resistant Broad-Spectrum SPF 50. This formula protects against the sun while hydrating your complexion. It is also fragrance-free, paraben-free and non-comedogenic.  In addition to wearing sunscreen, avoid being outside when the sun is at its peak, and continue to wear clothing and hats that will protect you from UV rays.

Do you have a question about ingestible sun protection products for Dr. Joel Schlessinger? Let us know in the comments section.

Joel Schlessinger MD discusses what could cause excessive sweating on ScarySymptoms.com 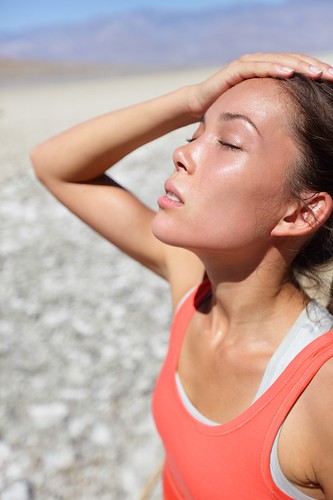 If you experience excessive sweating even without intense heat or physical activity, there could be a medical explanation for your symptoms. Joel Schlessinger MD recently discussed several things that could cause excessive sweating in an article titled “Causes of Excessive Sweating On Face, Neck, Head” on ScarySymptoms.com. Read on to find out more about these conditions.

Excessive sweating often has something to do with a specific nerve on the sweat glands, Joel Schlessinger MD shares.

Everyone sweats at least a little. Sweating is your body’s way of regulating its temperature. As sweat evaporates, it cools down the body and prevents us from overheating. However, those who struggle with excessive sweating could have a specific nerve to blame.

“Excessive sweating is usually caused by a certain type of nerve on the sweat glands that leads to sweating out of proportion to what is necessary to maintain our regular temperature,” Joel Schlessinger MD says.

“Some sweating is absolutely necessary but there is a point where it becomes too much!” Joel Schlessinger MD continues. Generally, this happens on areas such as arms, hands and feet (and underarms, of course), but some individuals have it all over. This is a different type of sweating that can be caused by the same unregulated nerves, or other conditions such as menopause, obesity, diabetes, pregnancy, high thyroid levels, Parkinson’s disease, lymphoma, gout and various infections.”

Joel Schlessinger MD also notes that hyperthyroidism is commonly associated with sweating. A blood test can check for this condition.

At his Omaha practice, Joel Schlessinger MD sees many patients who are going through menopause, and these women often have concerns about excessive sweating.

Joel Schlessinger MD suggests making an appointment to see your physician if you experience excessive sweating.

Although there are treatments available to help you manage excessive sweating, Joel Schlessinger MD recommends making an appointment to see your physician first. They will have the knowledge and expertise to be able to recognize if excessive sweating is a sign of something more serious. Once you’ve seen a professional, you can manage your symptoms with a clinical-strength antiperspirant like Hydrosal Professional Deodorant/Antiperspirant. The key ingredient in this formula is 15% aluminum chloride hexahydrate, an aluminum salt that helps control your body’s sweat production. This antiperspirant can be applied to the face or body.

Do you have a question about excessive sweating for Joel Schlessinger MD? Share with us in the comments.

Dr. Joel Schlessinger talks to MIMI about how to choose the right foundation. 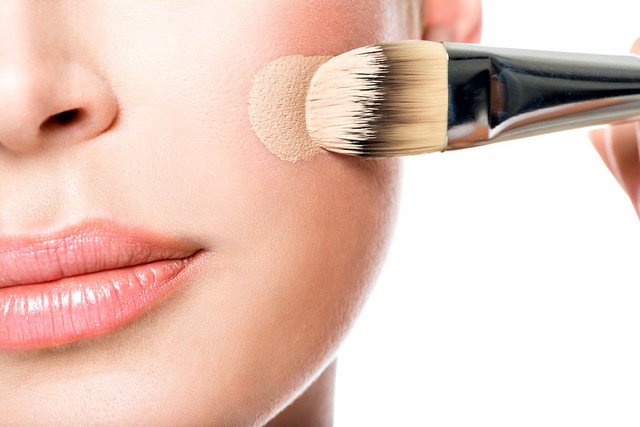 Foundation is an important step in your makeup routine to establish a flawless base for the rest of your products, but are you wearing the right one? Recently, Dr. Joel Schlessinger spoke with MIMI in an article called, “How to Wear Your Foundation Better”, about how to choose the right foundation for your complexion.

Choose the right formula based on your skin type, explains Dr. Joel Schlessinger.

If you have dry skin, you want to choose either a liquid, cream or serum foundation. Look a foundation that includes hydrating ingredients to nourish your skin. Dr. Schlessinger likes glo minerals Protective Liquid Foundation because its lightweight formula contains hydrating ingredients to soften and moisturize.
For oilier skin, Dr. Schlessinger recommends a powder or oil-free liquid foundation. These types of foundation provide coverage without adding oiliness or unwanted sheen to your complexion. jane iredale PurePressed Base Mineral Foundation SPF 20 is a nourishing powder foundation that diminishes the look of imperfections while also nourishing. Plus, it protects against UV rays.
“Anyone with mature skin should avoid powder formulas, which can settle in fine lines and wrinkles and accentuate signs of aging,” says Joel Schlessinger MD. Oxygenetix Oxygenating Foundation is great for mature skin. This breathable liquid foundation reduces signs of aging and stimulates cell growth to achieve a younger-looking complexion.

Dr. Joel Schlessinger recommends testing a foundation on your jawline.

Once you’ve determined which foundation formula is right for you, it’s important to choose a shade that closely matches your tone. Dr. Schlessinger and other experts agree that the best color match will result from testing foundation on your jawline, not the back of your hand.
For the most accurate results, try two to three colors along your jawline and blend into your skin. View the results in natural light. Whichever color disappears is the best match for you because foundation should even out your tone.

Do you have questions for Dr. Schlessinger about choosing the right foundation? Ask us in the comment section below.